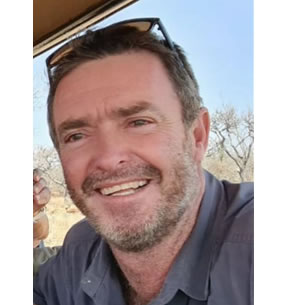 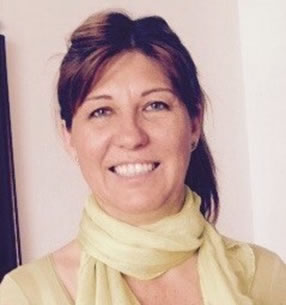 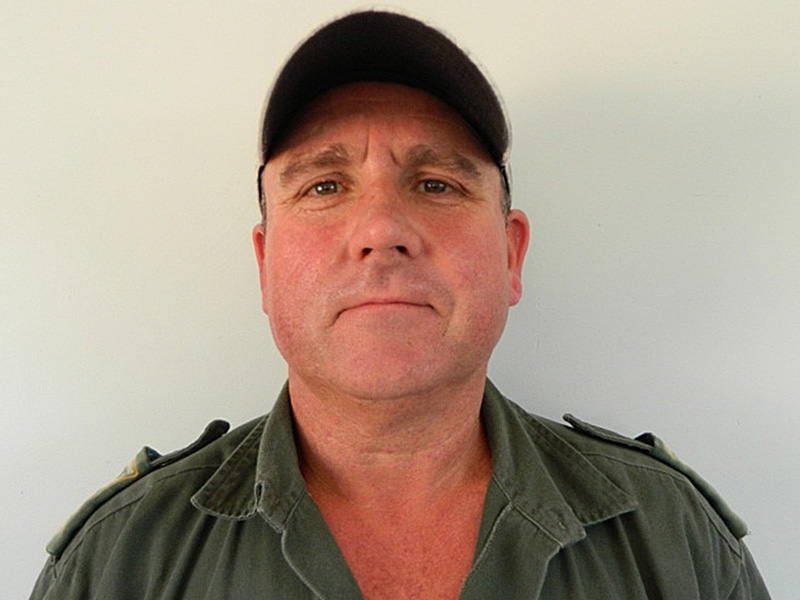 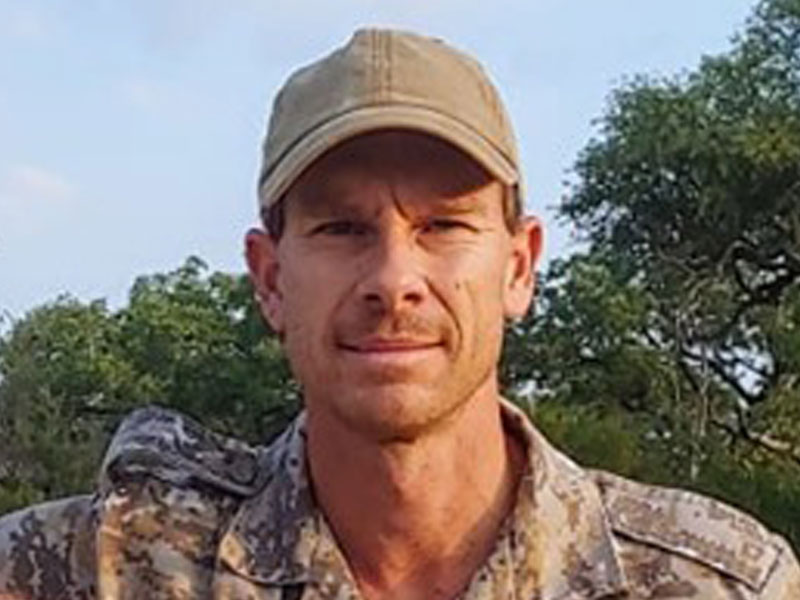 I was born in Zambia and moved to South Africa at an early age. I grew up and attended school in Johannesburg. As a child, my parents were forever taking my brother and me on holidays to the coast and into the bush, which is where my passion for wildlife and conservation began. Following school, I moved to Cape Town to study Nature Conservation. I was then called up to do my military service in the Air Force and was fortunate to join a conservation unit, (the SADF held a third of all conservation areas in the country back then). Following my national service, I longed for a conservation related environment and became qualified as a scuba diving instructor, managing a dive school and a dive shop and which gave me the opportunity to spend large amounts of time in the ocean.

My father, Jim had bought shares in Jejane (then Vienna Game Farm) in 1988 and my family and I would visit as often as time would allow. I undertook a number of my practical assignments for my Nature Conservation qualification on Jejane and was involved in the original construction of the western boundary fence. In 1995 I was employed as the reserve manager and have been associated with Jejane for the past 30 years.

Jejane has naturally changed a lot over the years since its inception and it has been a privilege to be a part of it for so long. My desire is to see it secured for what it set out to be, a piece of nature in the way it was intended, where the natural laws determine our actions, to be enjoyed, appreciated and respected by all that visit it.

I was born in Rustenburg and moved at the age of 9 to Komatipoort where I grew up on a farm. I attended Nelspruit High School. Growing up on a farm, my love for the bush and outdoor living started.

After school, I attended Ranger Guide Training School in a dangerous game region and completed a Field Guide Course. While applying for a position in the bush, I worked on an agricultural farm / game farm. I spent a few years farming before moving to Hoedspruit, where I started working at Off Beat Safaris, as a game farm assistant, working with and educating overseas volunteers about the bush. We also did many horse trails.

From there, I was appointed on Jejane Private Nature Reserve in 2004, as assistant farm manager and bush camp manager. I did my FGASA Field Guiding in 2009, and been associated with Jejane for the last 14 years.

I hope to see Jejane as a part of nature that everyone can still experience the wildlife and appreciate it. A place where nature will take its natural course and which we can preserve for generations to come, to love and appreciate the small things in nature – not just the big.

I was born in the Cape Province and moved up to the Highveld with my folks when I was still a toddler.

My hubby has always been a bush lover and my passion for the bush grew when we relocated to Hoedspruit in 2007. I started working on Jejane in 2007, left in 2011 and was only too happy to return when the position was available again in 2014.

I have my accounting qualifications and my diploma in PRPA, and handle the administrative duties on the farm. It is always such a pleasure to see the shareholders come and visit, and hear of the wonderful times they experience in this amazing haven.

I am truly blessed to be able to work in a beautiful piece of heaven on earth.

Rowan is a partner shareholder in #10. Rowan is married to Nicola and has two sons and a daughter who you will probably hear before you see on a game drive. Other than running around after his kids, he insists that golf and cooking are suitably aerobic exercises. The excitement of being at Jejane also gets his heart racing. He remains a committed South African sports fan, despite numerous disappointments.

Tim trained as an accountant having studied at Wits doing a B. Acc part time whilst working for Arthur Young as an auditor serving articles. Upon completion moved for a brief stint of around eighteen months as an internal auditor for the Freight Services Group an Anglo American Company. Then progressed into banking and spent time in project finance and corporate banking for around three years. Left South Africa in 1991 for the UK. Headed up a South African linked Company in the UK that distributed office electrics within the UK and Europe before branching off to set up a rival UK based business that manufactured and distributed a unique modular power system. Tim returned to S.A. in 2013 after licensing the technology to another UK manufacturer. Now receive royalties from this venture and have other interests in two property development businesses, one operating in Johannesburg and the other in Cape Town. Tim is now semi-retired.

Rod has been a shareholder on Jejane for 30+ years. Firstly, as a partner in #26 and then, after many years of dreaming and planning, the house on #32 was built.

Rod spent most of his professional life in construction and marketing in the glass industry, a good portion of which was traveling and working internationally - finally settling back in RSA and establishing a successful merchandising operation into the large retail stores.

2005 saw Rod and his partner Jude take a sabbatical from their life and work in Australia to market and manage four luxury Game Lodges in Klaserie Private Nature Reserve. Rhino capture, to notch ears and microchip horns was a large part of the marketing venture, bringing awareness to the plight of the Rhino to both South African and overseas visitors.

Rod is now happily retired, spending his time with family, playing golf and trying to spend as much time as possible on his beloved Jejane.

Security and Board Co-ordination

Pierre and Jane Hugo built #19 with Pierre’s brother André in 2000 after spending many years with his parents (André & Lucille) at #7 which was built in the early days of Jejane.  Pierre’s love for the bush was nurtured in the Timbavati where his uncle (also Pierre) had farms.

Pierre is a vet and Jane a dietician. They farmed dairy cattle in the Magaliesburg for the early part of their marriage before the severe drought in 1984 “chased” them back to Hermanus where they had met and married 10 years earlier. Pierre practiced as a vet while Jane raised their three children, only to start farming abalone 7 years later which kept them both busy for the last 30 years.

Pierre retired about two years ago but has been kept busy with several interests including building site 39 on Jejane, wave energy, cosmology and his portfolio on the Jejane board.

The long-term goal of installing electronic perimeter intrusion detection systems for the southern farms of Balule has proven extremely challenging and obtaining donations to fund this endeavour through the BCAP trust remains a major learning curve to conquer.

David Bradfield from farming background in the Eastern Cape has been involved in game reserve and national park management for 25+ years in both the state and private sector of South Africa, East Africa, and Asia. After initially specialising in black and white rhino protection in South Africa, David was recruited by the Frankfurt Zoological Society to assist with the management of Liwonde National Park in Malawi. Thereafter he spent time in tropical rainforest Cambodia, training rangers from the former Khmer Rouge.

David then spent ten years (hence the grey hair he says!) with the Wildlife Conservation Society in northern and central Afghanistan to establish protected areas in coordination with the Americans, the Afghan government, and keeping a wary eye on the Taliban.

There he led an expedition that led to the re-discovery of the Persian leopard in Afghanistan, and a narrow escape from a poachers ambush in northern Mozambique’s Niassa National Reserve is a story in itself to be told over a few ice cold G&T’s on a warm summers evening, under a marula tree in Jejane, which we will endeavour to defend from the elephants!

Justine started her career in the finance and corporate strategy departments of am FMCG company, after seven years she transitioned to the non profit sector with an international NGO, she was based in Asia and oversaw the regions Child Protection Projects. She has held both project management, fundraising and Director roles.

Having married David Bradfield she transitioned to the tourism industry as Lodge manager two years ago. She brings exceptional people and management skills to her post at Jejane, where she now resides with husband David and sons Tarquin and James. Justine is an avid reader and cyclist who’s highlight of most days is a good chat over a glass of wine or a cold GnT!